The Czech Republic is, in many respects, an ideal location for a study-abroad program. Once an independent nation-state born out of the collapse of the Austrian Empire in 1918, it opted, in 1948, for Communism to address its post-World War II challenges. At present, it is a post-Communist country still undergoing transformation and a member of the European Union slightly skeptical of accepting “all things western” as better. Czech society is Slavic, but it has developed a distinct character in the midst of the German culture dominant in the Central European region. Czechs are generally considered to be the most individualistic Slavic nation and their ethic is quite “Protestant.” Czech cultural traditions embrace both Catholicism and religious dissent; the martyrdoms of St. Wenceslas and of Master Jan Hus are both commemorated by state holidays, even in a nation which the experience with Hapsburg, Nazi, and Soviet imperial domination has shaped into the most atheistic in Europe.

Furthermore, the Czech Republic provides a safe haven in a region currently experiencing an unprecedented wave of immigration from war-torn Syria. War refugees are intermixed with economic migrants who took the opportunity of the innitial welcoming attitude of Germany and joined the rest in the quest of their “European Dream”. They aim for the richer countries of the EU and avoid the post-Communist countries like the Czech Republic. Students based in the Czech Republic have, as a result, a rare advantage of being able to observe the difficulties attendant the hasty and blanket acceptance of all migrants, a policy initiated by Germany, who is already now struggling under the pressure of sheer numbers and their different cultural values (for instance in regards to women) and often unrealistic expectations.

A visitor from Western Europe or the U.S. has an eerie sense of basic compatibility and jarring difference at the same time. On the other hand, Western “Otherness” may well stand in high relief to visitors from non-Western cultures, despite the cultural convergence due to colonization and/or globalization. However, it might be that the Central European habit of perceiving things and people within a complex structure might turn out mentally more accommodating for non-Westerners than for Americans. This kind of milieu is most stimulating for a student interested in learning about the “Other.” 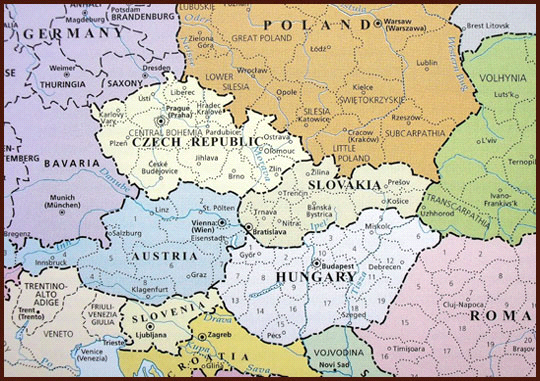 The Czech Republic neighbors Austria, Germany, Slovakia, and Poland. Geographically, it is remarkably diverse for a country slightly smaller than South Carolina. Some would say that the country’s capital, Prague, is the most charming capital in Central Europe, rich both in history and in present attractions. It is very English-friendly, so students should encounter no serious linguistic difficulties even off campus. The Czech Republic is at the heart of Europe, permitting convenient, rapid, and relatively inexpensive travel to any part of the continent.